The History of Ice Cream

​
“I scream, you scream, we all scream for ice cream.” This popular song hit the number three spot on the record charts in 1928, reflecting the passion that Americans have always had for this delicious frozen treat. Most of us have fond memories of eating ice cream at special occasions such as birthday parties, ice cream socials, or at the old-fashioned ice cream parlor.

There are several different kinds of “iced cream.” ICE CREAM is rich, smooth and creamy. GELATO is thick and dense, containing less air than ice cream. SHERBET is usually fruit flavored and made with light cream or milk. FROZEN YOGURT is made with yogurt rather than milk or cream. SORBET consists of pureed fruit or fruit juices and no milk. ICE is a sorbet with a more granular texture. In Europe, sorbets and gelato are popular. Sherbet can be found all around the world, even in places like Africa and Indonesia.

The earliest written record of a frozen confection comes from ancient China. In Rome, Emperor Nero is said to have sent slaves up into the mountains to find snow and ice, which was then mixed with nectar, fruit pulp, and honey. Iced desserts were served in the wealthiest households and courts of Italy, England, France, and Spain.

Ice cream came to America from Europe. The first ice cream parlor opened in New York City in 1776. Dolly Madison, the wife of President James Madison, popularized ice cream in 1812 by serving a dessert of frozen cream, sugar and fruit at the White House. In 1843, a New Jersey homemaker named Nancy Johnson invented a hand-cranked ice cream churn. From 1847 to 1877, more than 70 ice cream churn improvements were patented.

In 1851, the first commercial ice cream plant opened in Baltimore, run by Jacob Fussell of Virginia. Fussell is now known as the father of the American ice cream industry. He used ice chips and an underground storage area to keep his ice cream cool and fresh. Beginning in the early 1900's, dry ice was used to keep ice cream cold. With the introduction of mechanical refrigeration, the treat became easily distributable and profitable. The continuous freezer, developed by Clarence Vogt in 1926, and later versions produced by other manufacturers, allowed ice cream to be mass-produced.

The ice cream shop or soda fountain has since become an icon of American culture. By the end of the 20th century, many brands and flavors of ice cream were being marketed on a large scale in supermarkets and franchised parlors. Popular ice cream brands such as Breyers and Dreyers contain more sweeteners and added flavorings. Even with all of the prepackaged ice cream varieties sold these days, homemade ice cream has not lost any of its appeal. Electric and hand-cranked machines make homemade ice cream a fun project for the whole family.

Did You Know…?
Water normally freezes at 32° F, while a salt solution freezes at a lower temperature. The more salt there is in a solution, the lower its freezing point. This means that when salt is added to ice, it causes the ice to melt. When salt is used in making ice cream, the melting ice pulls heat out of the ice cream mixture. This results in the mixture freezing more rapidly at a cooler temperature than is possible with ice alone. (Salt water is also a good weed killer. So if you make any ice cream, don't pour the leftover water on your mom’s favorite plant!)

Make Your Own Ice Cream
Here are some easy ice cream recipes that you can make without an ice cream machine.

Ice Cream in a Bag
Place in a small Ziploc bag (heavy duty freezer-type) and "zip" closed: 1 tablespoon sugar, 1/2 cup milk or half & half, and 1/4 teaspoon vanilla. Place in a gallon-size Ziploc bag and "zip" closed: 6 tablespoons rock salt or table salt, the filled and zipped small bag, and ice cubes to fill bag about 3/4 full. Wearing oven mitts to keep your hands from freezing, roll and squeeze the filled bag for about 15-20 minutes until frozen. Open the outer bag, remove the inner bag and wipe it clean. Enjoy eating the ice cream right out of the bag. Makes 1 serving.

*Right click on the word search below to save and print. 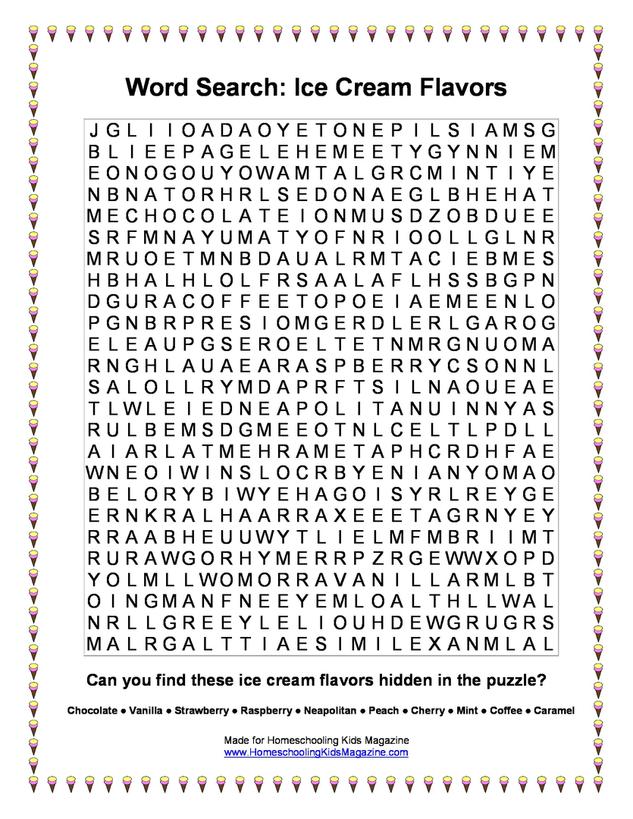