POETRY WORKSHOP
Poetry is an art form, just like painting or singing. There are poems in all of us just waiting to be coaxed onto paper. Are you a poet and don't know it? Try these activities and find out!

Acrostic
Acrostic poems are also called title poems. First, decide on a title for your poem. Write it downward on your paper. Use each letter in the word as the first letter of a line. You can write down your name and use adjectives that describe you, or write one using a friend's name, or use any subject and write a poem using the letters of that word. The lines can rhyme but they don’t have to.
Spring is here
Pretty flowers
Rabbit and robin
I plant my garden
Nice rain showers
Green everywhere

Riddle
Poems can be riddles. Try writing a poem in which the reader has to figure out what you are describing.
His bill an auger is,
His head, a cap and frill.
He laboreth at every tree-
A worm his utmost goal.
-Emily Dickinson
(What is it? A woodpecker!)

Limerick
A limerick is a five-line nonsense poem with a specific meter. The rhyme scheme is usually a-a-b-b-a. The first, second, and fifth lines have three stresses; the third and fourth lines have two stresses. Limericks often contain internal rhyme and alliteration (repeated letters or sounds).
1. A tutor who tooted the flute (a)
2. Tried to tutor two tooters to toot; (a)
3. Said the two to the tutor, (b)
4. "Is it easier to toot, Sir, (b)
5. Or to tutor two tooters to toot?" (a)

Diamante
Diamantes are seven-line poems that make a diamond-shaped pattern and shift in meaning from top to bottom.
Follow these directions:
1. First, write down a noun as a subject. (At this point you may wish to skip to line seven and write down the opposite of this noun.)
2. On the second line, write two adjectives describing the subject.
3. On the third line write three participles (verbs ending in -ing) that describe the subject.
4. On the fourth line, write down four nouns related to the subject. (The second two nouns should be contrasting or suggest a change from that of the first two.)
5. On the fifth line write three participles indicating and continuing the change made in line four.
6. On the sixth line write two adjectives carrying on the idea of change or development.
7. On the seventh line, write a noun that is the opposite of the subject from line one.
1. Cocoon
2. Brown, ugly
3. Growing, stretching, tearing
4. Blob, bristles - velvet, wings
5. Opening, spreading, fluttering
6. Golden, beautiful
7. Butterfly
Cinquain

A cinquain is a five-line poem.
1. On the first line, write down a noun-a person, place, or thing, idea, or quality.
2. On the line below that, write two adjectives-words that describe the noun. Separate the two adjectives with a comma.
3. On the third line, write three verbs that tell what the noun on the first line does. Separate with commas.
4. On the fourth line, write a thought about your noun. A short phrase or figure of speech will do nicely.
5. On the fifth line, repeat the word you wrote on the first line, or write down a synonym or some other related word.
1. Trees
2. Shady, green
3. Branching, blooming, growing
4. Waving in the breeze.
5. Trees
Sonnet
After you’ve mastered the poetry forms above, you might want to try writing a sonnet. Here is one inspired by William Shakespeare’s Sonnet 18:

Sonnet 18 (A Cheesy Parody)
Shall I compare thee to a nacho chip? (a)
Thou art more crunchy -- though without the cheese: (b)
Rough winds do blow when I forget the dip, (a)
For nachos are so very hard to please: (b)
Sometimes too hot, so I must let them cool, (c)
And often is their gold complexion dimm'd, (d)
But only when I make them like a fool, (c)
By chance they burn like candles yet untrimm'd: (d)
But thy eternal crunchiness won't fade, (e)
Nor burn like all my failed attempts to bake, (f)
Nor shall you be like these -- so poorly made, (e)
Which in eternal snacking I forsake. (f)
So long as men can breathe and tongue can taste, (g)
Your nacho-likeness will not be erased. (g)​ 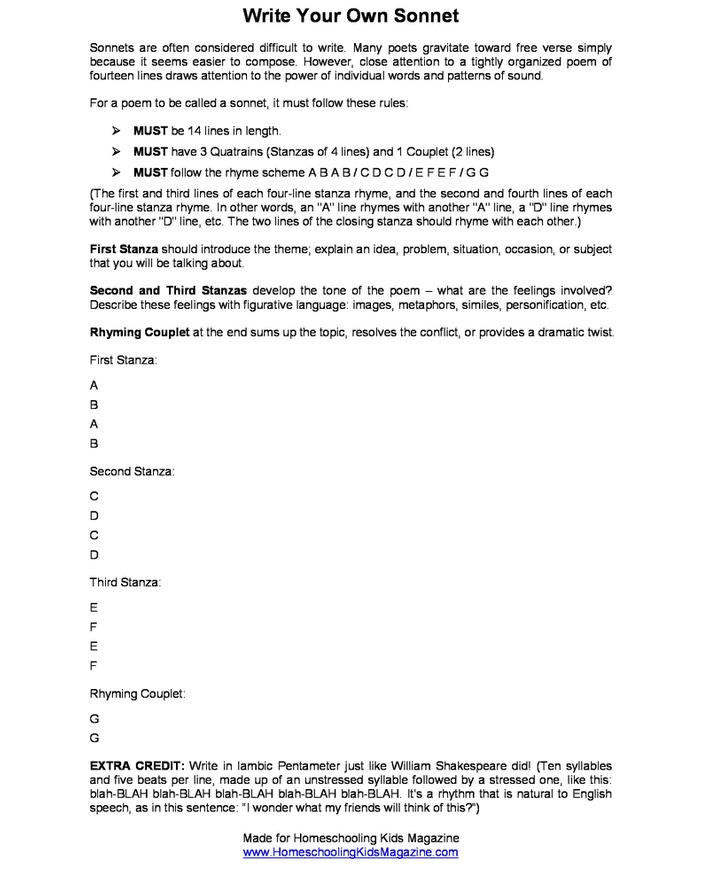 *Right click on the worksheet below to save and print