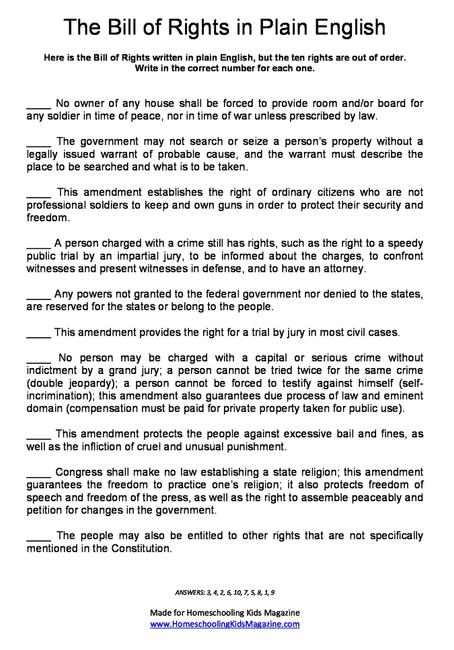 Patrick Henry & The Bill of Rights
Patrick Henry (1736-1799) was an eloquent orator and motivational leader at the time of the Revolutionary War. He was a great American patriot, a strong believer in citizens’ rights, and a prominent spokesman for independence from England.

On March 23, 1775, Patrick Henry delivered his famous speech protesting against British tyranny in which he declared, “I know not what course others may take; but as for me, give me liberty, or give me death!” Henry’s stirring words became a rallying cry for the colonists and inspired them to action against the British.

Patrick Henry was born near Richmond, Virginia, the second of ten brothers and sisters. Visitors to Richmond can see the church where he worshiped and the places where he made some of his famous speeches. Henry’s fiery and passionate speaking style was a departure from traditional oratory with its classical allusions; it was more like the dramatic preaching of evangelical ministers during the Great Awakening of the 1730’s-40’s.

At the age of ten, Patrick was making slow progress in the study of reading, writing and arithmetic at a small country school. So for the next five years, young Patrick was tutored by his father who was a surveyor and his uncle who was a minister. Patrick learned mathematics, Latin and Greek, but his favorite subject was history. He would read and re-read books about Greece, Rome, England, and the American colonies.

Patrick was not interested in formal education and went to work at age fifteen. When he was eighteen, Patrick married sixteen-year-old Sarah Shelton. She died at the young age of 21, after having six children. Patrick Henry and his second wife, Dorothea Dandridge, had 11 children.

Patrick Henry tried farming and managing a general store but failed at both of these occupations. At the age of 24 he decided to study law, teaching himself by reading law books. After just six weeks of applying himself to this endeavor, Patrick took the oral bar examination and passed it. Soon he achieved great acclaim as a lawyer. Within the first three years he had already handled more than 1,000 cases and won most of them.

In 1765, Patrick Henry was elected to the House of Burgesses, which was the lawmaking body of Virginia. While there, Henry was one of the first to speak in public on the rights of the colonies to rule themselves. He said that they could never be free under a tyrannical English government. The colonies eventually did go to war against England, and they became independent states.

Henry was elected as the first Governor of Virginia and served for five terms. A constitution was written to establish a government for the United States. However, Henry was an anti-Federalist who opposed the adoption of the U.S. Constitution as the supreme law of the land, fearing federal abuse of power. He thought the Constitution would give too much power to the national government while taking away too many freedoms and rights from the states. This position would be later taken by his home state of Virginia at the start of the Civil War.

As leader of the anti-Federalists, Patrick Henry demanded that the Bill of Rights be added to the U.S. Constitution to limit the federal government’s power more strictly, and to guarantee the protection of each and every citizen’s basic individual liberties. In other words, the Bill of Rights protects the people from the government. Historians say that the freedoms in the Bill of Rights would never have come about without Henry’s persistence.

The Bill of Rights
I. Congress shall make no law respecting an establishment of religion, or prohibiting the free exercise thereof; or abridging the freedom of speech, or of the press; or the right of the people peaceably to assemble, and to petition the government for a redress of grievances.

II. A well regulated militia, being necessary to the security of a free state, the right of the people to keep and bear arms, shall not be infringed.

III. No soldier shall, in time of peace be quartered in any house, without the consent of the owner, nor in time of war, but in a manner to be prescribed by law.

IV. The right of the people to be secure in their persons, houses, papers, and effects, against unreasonable searches and seizures, shall not be violated, and no warrants shall issue, but upon probable cause, supported by oath or affirmation, and particularly describing the place to be searched, and the persons or things to be seized.

V. No person shall be held to answer for a capital, or otherwise infamous crime, unless on a presentment or indictment of a grand jury, except in cases arising in the land or naval forces, or in the militia, when in actual service in time of war or public danger; nor shall any person be subject for the same offense to be twice put in jeopardy of life or limb; nor shall be compelled in any criminal case to be a witness against himself, nor be deprived of life, liberty, or property, without due process of law; nor shall private property be taken for public use, without just compensation.

VI. In all criminal prosecutions, the accused shall enjoy the right to a speedy and public trial, by an impartial jury of the state and district wherein the crime shall have been committed, which district shall have been previously ascertained by law, and to be informed of the nature and cause of the accusation; to be confronted with the witnesses against him; to have compulsory process for obtaining witnesses in his favor, and to have the assistance of counsel for his defense.

VII. In suits at common law, where the value in controversy shall exceed twenty dollars, the right of trial by jury shall be preserved, and no fact tried by a jury, shall be otherwise reexamined in any court of the United States, than according to the rules of the common law.

VIII. Excessive bail shall not be required, nor excessive fines imposed, nor cruel and unusual punishments inflicted.