May is National Bike Month. Celebrate by reading this article about the history of bicycles, printing out today’s coloring page, and going on a bike ride…

Bikes & Bicycling
Bicycling is a popular pastime for all ages, from preschoolers to seniors. Bikes are fun to ride, whether traveling around town, touring the countryside, participating in races, performing bike motocross stunts, or simply using them for exercise. Bicycling is a sport the whole family can do together. For youth, biking is the way to adventure; for older folks, it keeps them young in heart.

The world's first bicycle was made in France around the 1700's. It was made of two wheels joined by a wooden bar. The rider sat on a wooden rail and pushed the vehicle along the ground with his feet. This primitive vehicle had no pedals and could not be steered.

In Germany, Baron Karl von Drais built a similar vehicle in 1816. The big improvement of this bicycle over the first was that the front wheel could be turned for steering. A number of versions appeared, called walkalongs, hobby horses, or Draisines. Some had iron tires over the wooden wheels, padded chest supports, cushioned leather saddles or spring-mounted seats.

Over the years, the comfort and efficiency of these early bicycles continued to improve. A Scotsman used treadles to transmit power to the rear wheel to drive the vehicle. An English inventor attached a ratchet device to the front wheel, which was pumped with the arms. Others arrived at the idea of pedals that were attached directly to the front wheel.

However, it wasn't until after the American Civil War that the idea of a pedaled bicycle caught the public's fancy. In 1866, a French carriage maker named Pierre Lallement began manufacturing bicycles in Connecticut. His bicycle's front wheel was slightly larger than the rear wheel. Pedals were attached directly to the front wheel axle. It was called a "boneshaker" because it jolted the rider so much, especially on the cobblestone roads of the day.

New versions of Lallement's bicycle began to appear rapidly. In each, the front wheel became slightly larger and the rear wheel slightly smaller, since a higher front wheel achieved greater distance for each turn of the pedals. Other improvements included adjustable seats and the addition of rubber tires over the rims to reduce noise and prevent the wheels from slipping. By the 1870's, most wheels were fitted with wire spokes rather than heavy wooden spokes.

The high-wheeled bicycle, consisting of a small rear wheel and a huge front wheel with a seat mounted directly over it, came into vogue around 1875. In the most common models, the front wheel was from four to five feet tall, but a few were as high as eight feet. The high front wheel gave a rider the full advantage of his thrust in pedaling, as one turn of the pedals sent the big wheel on a complete revolution. This allowed bicyclists to achieve faster speeds, up to 25 mph.

Wheelmen, as these cyclists were called, were proud of their skill in handling the high-wheeled bicycles. Bicycle parades, exhibitions, and cross-country tours gave them an opportunity to sport their vehicles. However, a big disadvantage of high-wheelers was the difficulty in mounting them, and the danger of falling off from that height. Because the rider sat so high above the center of gravity, if the front wheel was stopped by a stone or rut in the road, the entire apparatus rotated forward on its front axle, and the rider hit the ground head-first. Thus, the term "taking a header."

A high-wheeled tricycle was first made in the 1880's for ladies who were afraid of the high bicycles, and for gentlemen such as doctors and clergymen who preferred to ride with more dignity. Then safety bicycles, much like today's bicycles, were invented. While the "highboys" remained in use for more than a decade, eventually the safety bicycle won out.

The safety bicycle returned to two wheels of the same size, but it could go as fast as the high-wheeled ones due to a major improvement. Pedals drove the rear wheel by a chain and sprocket, as they do today. The chain was arranged so that turning the pedals once made the back wheel turn more than once around. The rider sat lower and more comfortably, between the wheels. Rubber tires were filled with air, making for a softer ride. Coaster brakes were also added.

In the 1890's, bicycling became so popular that people went without other luxuries and even necessities so they could afford the best possible bicycle. At that time, bicycles were the fastest wheels on the road. Bicycles were used for recreation as well as transportation. Sunday afternoon rides became popular, with women participating as actively as the men. The tandem "bicycle built for two" became a fad. There were even some bicycles for four riders.

It has been said that the wheel was the single greatest invention in the history of mankind - and the most useful application of the wheel may well be the bicycle. Most people don't realize how bicycles influenced our present way of life. Bicycling was the first athletic activity to bring women out of the parlor. They stopped wearing hoopskirts, bustles, and cumbersome clothes and changed to shorter skirts, bloomers, culottes, and apparel more practical for bicycling.

In addition, the bicycle literally paved the way for the automobile. Many early automobile engineers and manufacturers started out as bicycle builders. The first automobiles had slim tires and spoked wheels just like bicycles. They were given their test runs on the smooth roads that had been demanded by bicyclists. The first motorcycle was a gasoline-powered bicycle. Even Wilbur and Orville Wright's historic flying machine was designed in their bicycle shop.

After the introduction of automobiles, bicycles slipped out of favor for more than half a century. Bicycle manufacturers resorted to selling two-wheelers and tricycles as toys for children. Then in the 1960's, biking enjoyed a revival as it once again gained popularity with adults. Circumstances that brought the bicycle back included the need for exercise, an increase in leisure time, interest in the outdoors, concern for the environment, and a desire to return to a simpler way of life.

Today's bicycles represent over two centuries of development. Gear shifts were added to modern bicycles for changing speeds and making pedaling easier. Space-age materials and engineering provide maximum performance and relatively low maintenance. Types of bikes include the English 3-speed of the 1960's, 10-speed derailleur bikes from the 1970's, and the mountain bike which has been around since the late 1980's. Among the many other variations are hybrid street bikes, BMX bikes, unicycles, folding bikes, exercise bikes, recumbent bikes, and even pedal cars

Color the cyclists and use your imagination to fill in the background. What kind of road are they riding on? What kind of scenery do they see? What is the weather like? 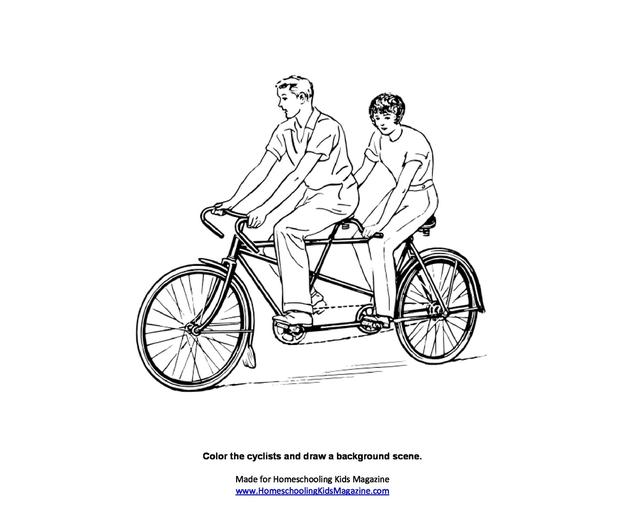 *Right click the coloring sheet below to save and print