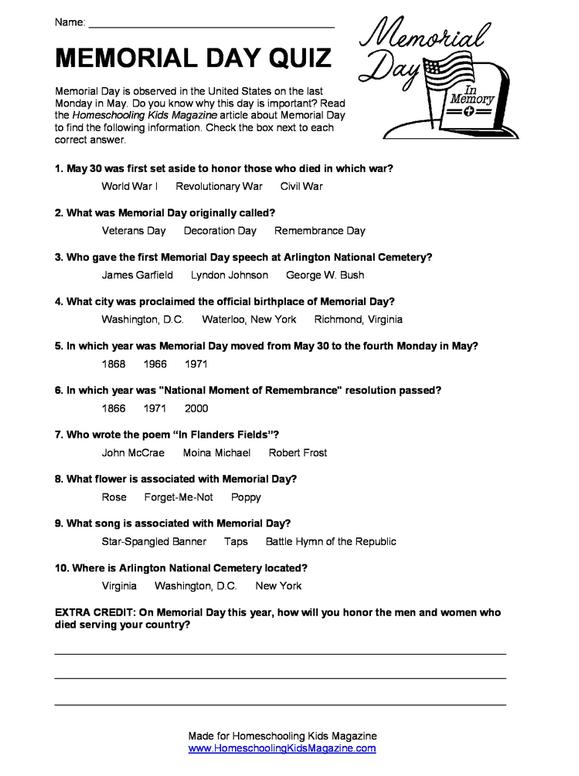 Memorial Day
Memorial Day is celebrated on the last Monday in May. This year, Memorial Day will be observed on May 30. It’s a day off from school and work, and the unofficial beginning of summer. More importantly, it’s an occasion to pay tribute to those men and women who died in the service of their country, particularly those who died in battle or as a result of wounds sustained in battle, and to decorate their graves with flags and flowers.

Women's groups in the South had started decorating soldiers' graves – both Confederate and Union – during the Civil War. They also played a major role in commemorating the sacrifices of Confederate soldiers in the years immediately following the war. This Southern ladies’ tradition served as a model for the memorial holiday embraced by the rest of the nation.

On May 5, 1866, a community-wide observance in Waterloo, New York, honored local soldiers and sailors who had fought in the Civil War, which had ended the year before. Businesses closed, flags were flown at half-mast, and residents decorated the graves of their fallen heroes. On May 5, 1868, General John Logan, Commander-In-Chief of the Grand Army of the Republic, an organization of Union veterans, declared that a national “Decoration Day” should be observed annually on May 30.

Arlington National Cemetery in Virginia, located on the former grounds of Confederate General Robert E. Lee’s estate, was the site of the first Decoration Day National Observance on May 30, 1868. This cemetery, across the Potomac River from Washington, D.C., contained the graves of 20,000 Union and several hundred Confederate soldiers. In a speech given at the event, General James A. Garfield said: "They summed up and perfected, by one supreme act, the highest virtues of men and citizens. For love of country they accepted death, and thus resolved all doubts, and made immortal their patriotism and virtue."

The preferred name for the holiday gradually changed from "Decoration Day" to "Memorial Day," which was first used in 1882. By the end of the 19th century, Memorial Day ceremonies were being held on May 30 all across the nation (except in some Southern states which had their own Confederate Memorial Day). After the First World War, Memorial Day was expanded from honoring just those who died fighting in the Civil War, to honoring Americans who died in any war.

In 1918, an American teacher and humanitarian named Moina Michael had the idea of using red poppies as a symbol of remembrance for the war dead, thus founding the Memorial Poppy movement. Miss Michael was inspired by the poem "In Flanders Fields," written by Lieutenant Colonel John McCrae on the front lines during World War I. The opening lines state: "In Flanders fields the poppies blow / Between the crosses row on row."

In 1966, President Lyndon Johnson declared Waterloo, New York, to be the official birthplace of Memorial Day. In 1971, the U.S. Congress declared Memorial Day to be a national legal holiday. The holiday was also moved to the last Monday in May, because in 1968 Congress had passed a law to ensure a three day weekend for all federal holidays. Several southern states still have an additional, separate day for honoring the Confederate war dead.

Over the years, the original significance of Memorial Day gradually faded from the public's consciousness. Changing the date to create a three-day weekend probably contributed greatly to that. What began as a solemn day of mourning, remembering, and honoring departed loved ones became associated with campouts, picnics, and barbeques with only a token nod, if any, given toward our honored dead.

To help Americans remember the meaning of "memorial" on Memorial Day, in December 2000 the "National Moment of Remembrance" resolution was passed by Congress and signed into law by President George W. Bush. On Memorial Day at 3:00 p.m. local time, all Americans are asked "to voluntarily and informally observe in their own way a moment of remembrance and respect, pausing from whatever they are doing for a moment of silence, or listening to Taps."

Memorial Day should be a day when we remember our ancestors, our family members, our neighbors, and our friends who made the ultimate sacrifice in service to our nation. F. L. Lloyd of West Chester, Pennsylvania appropriately described Memorial Day when he said, "If it is considered a holiday, why is it so? I consider it to be a national day of mourning. This is how we observe this day in our home. Because of what that day represents, the rest of the days of the year are our holidays."

-Going to cemeteries and placing flags or flowers on veteran’s graves.

-Flying the American flag at half-staff until noon.

-Participating in the "National Moment of Remembrance."

-Donating to disabled veterans and pledging to aid the widows, widowers, and orphans of deceased veterans.

-Many families also choose to decorate the graves of all departed loved ones on this day.

-Create cards, bookmarks, or other appropriate gifts for veterans.

-Research the Civil War, Arlington National Cemetery, or the Tomb of the Unknown Soldier.

-Look in poetry anthologies for poems about flags, national service, and wars.

-Compose your own poem about one of these topics.

The Story of Taps
"Day is done, gone the sun, from the hills, from the lake, from the skies. All is well, safely rest, God is nigh."

The 24-note melancholy bugle call known as Taps is thought to be a revision of a French bugle signal that notified soldiers to return to their garrisons for the night. It was sounded an hour before the final bugle call to end the day by extinguishing fires and lights. The present-day version of Taps was made during the American Civil War by Union General Daniel Adams Butterfield. He asked his brigade bugler, Oliver W. Norton, to play the notes and, after listening, lengthened and shortened them while keeping the original melody. He ordered Norton to play this new call at the end of each day thereafter, instead of the formal regulation call. The music was heard and appreciated by other brigades, and even Confederate buglers adopted this bugle call. Taps was played at the funeral of Confederate General Stonewall Jackson ten months after it was composed. By 1891, Army infantry regulations required Taps to be played at all military funeral ceremonies. Taps is now played by the military at burial and memorial services, to accompany the lowering of the flag, and to signal the "lights out" command at day's end.