Jamie Grace: On Being Homeschooled

Jamie Grace Harper, 24, is a Christian musician, singer, songwriter, actress and speaker from Atlanta, Georgia. Her father, Southern Baptist Bishop James Harper III, founded and is the pastor of Kingdom City Church in Stone Mountain, Georgia. Born on November 25, 1991, Jamie Grace has always been outgoing and friendly with a streak of resilience and dedication that is well beyond her years. She grew up singing and playing instruments as a young child in church and at home with her older sister Morgan. As a young teen, she started writing her own songs and scripts. On July 16, 2006, she created a YouTube account and began posting videos of her songs online.

Jamie Grace and her sister were educated by their mother, Mona Harper, at a time when few African-American families homeschooled. Mrs. Harper taught them how to read using the Bible and encyclopedias as textbooks and gave them math lessons in grocery aisles. While encouraging them to explore new things and become lifelong learners, Mrs. Harper also wanted to tap into her daughters’ gifts. “We were always taught to write our own books or make up our own songs, there was always something creative to do around the house,” Jamie Grace told AJC.com. Both sisters were 16 years old when they graduated high school and began college. They credit homeschooling for the success they’ve experienced in academics and the arts.

Jamie Grace’s huge success has come in spite of being diagnosed with Tourette Syndrome (TS) at the age of 11. TS is a neurological disorder characterized by repetitive, involuntary movements and vocalizations called tics. “I learned early on that Tourette’s is not life-threatening, but it is life-altering,” she explains. “It took our lives for a spin.” She also has OCD and ADHD.

Jamie Grace was a young teen when she started imafighter.org to raise awareness and share support for teens with TS. “I was learning how to be confident in ‘being different,’ Jamie Grace says. “I wanted to encourage my peers and also meet kids and teens that I had something in common with.” At the same time, Jamie Grace began pursuing music, acting and speaking as a way of sharing her story and faith to encourage other kids who may also have struggles in life.

Jamie Grace plays the drums, guitar, piano, bass guitar, ukulele and banjo. In a somewhat unique style, she combines elements of hip hop, folk, and pop into one distinct sound. In 2010, when she was 19 years old, Jamie Grace was discovered via her YouTube channel by multiple GRAMMY® winner TobyMac and signed to his label Gotee Records. She began touring full time in January 2011 just as she wrapped up her junior year at Point University.

Jamie Grace released her debut album One Song at a Time in September 2011. Her song “Hold Me” landed her a nomination at the 2012 Grammys, and she won the 2012 Dove Award for New Artist of the Year, where she was the youngest nominee. “I’m still having a hard time processing the response to ‘Hold Me,’ the song I started in my dorm room,” says Jamie. The song actually first came to be as she was describing her “snuggie.” As she continued to describe her blanket and add words to the tune, she came to the realization that God’s love embraced her so much more than any physical commodity ever could.

In college, Jamie Grace studied child and youth development. After having been homeschooled all those years she said “I was not used to sitting in a lecture setting.” However, “I learned how to be quite independent in college,” she added. “You learn how to really get your stuff done.” On May 12, 2012, Jamie Grace graduated with a four-year Bachelor’s Degree in children’s ministry from Point University. Now she is a full time recording artist and actress who tours the country performing and speaking.

Jamie Grace’s second album, Ready To Fly, was released in January 2014. “The entire concept of Ready To Fly is being ready even when you don’t know what the Lord has planned for your future,” explains Jamie. “I realized I don’t have to have my whole life figured out to start my journey. This record is about being in the waiting with God, yet while you’re waiting being ready to move – ready to fly – when the timing is right.”

Jamie Grace says her hit tune “Beautiful Day” from that album is more than just a fun, catchy tune. “It has a message saying that in spite of what we’re going through, every day is a good and an incredible gift because God made it,” she says. “In my young life I learned that every day can begin worshiping my creator.”

In addition to her music, Jamie Grace is known for her role on TBN’s “IShine KNECT.” She can also be seen in the 2013 film Grace Unplugged. Actress AJ Michalka – who plays the lead role in the movie – sang Jamie’s praises after spending time with the singer on set. “She is amazing. I absolutely adore her. She is so talented, she had never acted before and she did so well,” said AJ. “She was really, really comfortable and we actually became close friends. It was very easy to work with her and it just felt natural.”

Jamie Grace has come a long way since being “discovered” by TobyMac – something she is still trying to wrap her head around. “The past few years have been absolutely incredible and I feel so blessed to have the privilege of sharing even more music,” she says. Jamie Grace wants to continue to encourage other people by being involved in projects that have a great message whether it’s music, movies, or anything else.

Lately she and her sister have teamed up as a duo called “Harper Still,” splitting their time between their individual careers (Morgan is into all sorts of creative media), and singing country-influenced pop music together. They have also been developing a series of workshops and other events for people interested in the music industry. On April 8, Jamie Grace and Morgan will teach a Singer and Songwriter Mini Camp at Renaissance Church in Las Vegas.

Earlier this year, Jamie Grace started working on another studio album. “On this new CD, I’m definitely going to pull from my roots a little more. I love Christian hip hop, I love gospel music and I also love Southern gospel music. I’m really excited to bring something from all of those.” The new project will likely include a song or two with her older sister, Morgan. “We’re definitely each other’s biggest fan.” 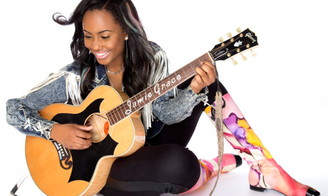