Father's Day
Daddy, Dad, Da, Papa, Pop, Pa, Paw, Father...no matter what you call him, he is special! Fathers are our providers, protectors, coaches, counselors, role models, and so much more. Father's Day is coming up on June 19th. This would be a good time to express some gratitude and appreciation for everything that your father does for you. Even though dads are not always perfect, they need your love and respect.

Father's Day was first proposed by Sonora Louise Smart Dodd of Washington State, who in 1909 was inspired by a Mother's Day service. This gave her the idea to petition for a special day to honor fathers. In particular, Mrs. Dodd wanted to honor her own father, a Civil War veteran, who had raised six children by himself after his wife died. Sonora's father was born in June, so that is the month in which she proposed to celebrate Father's Day. Through Sonora Dodd's efforts, the first Father's Day celebration was held in Spokane, Washington on June 19, 1910.

In 1924, President Calvin Coolidge agreed with the idea of a national Father's Day. But it was not until 1966 that President Lyndon Johnson signed a proclamation officially declaring the third Sunday of June to be Father's Day in the United States. However, that 1966 Presidential Proclamation was only for one year. Finally on April 24, 1972, President Richard M. Nixon proclaimed Father's Day to be an annual holiday. Today, Father's Day is as popular as Mother's Day.

Father's Day Gift Ideas
Rather than buying a stereotypical Father's Day gift, think about what your father really likes. In general, a gift from the heart means the most, because Dad will appreciate the thought behind it more than anything else. One of the best things you can do for your father is to share your time and interests with him. Here are some traditional as well as creative

Let Dad Be King
Treat Dad royally on Father's Day. Set up a lawn chair or hammock in a shady spot and cover a table with magazines and books. Serve him a tall glass of his favorite cold drink. Or if he's a couch potato, give him a supply of DVDs to watch. While he enjoys a peaceful afternoon, the "queen" and the "court jesters" can cook up some special treats (see below).

Dad's Own Snack Mix
Serve Dad a customized snack mix that will satisfy his appetite and tickle his funny bone. Depending on his personal tastes, the ingredients can be salty, sweet, crunchy or soft. Get a big bowl of popcorn to start with. Is Dad nutty? Add peanuts. Corny? Put in some corn puffs. Sweet? Include his favorite candy. Does he like fishing? Throw in some goldfish crackers and gummy worms. Does he like gardening? Toss in some sunflower seeds. Other possible ingredients would be: dry cereal, croutons, pretzels, chocolate chips, raisins, shredded coconut, mini marshmallows.

Dad's a Hero
For lunch, make a sandwich stuffed with cold cuts and cheese. At any other time this might be called a hoagie, submarine, or grinder. But serve one to Dad on Father's Day, and there's only one name for it: a hero sandwich! Cut a loaf of French bread in half lengthwise. Layer on slices of ham, turkey, and Provolone, Swiss or American cheese. Top with lettuce and sliced tomatoes. Add onions, pickles, olives and peppers, if desired. Spread on mayonnaise or mustard, or drizzle with Italian dressing and sprinkle with oregano. Serve with potato chips and ice-cold lemonade.

Make a D-A-D Cake
Bake Dad's favorite cake flavor in one 8-inch round pan and one 8-inch square pan. When the cakes have thoroughly cooled, remove from the pans. Cut the round cake in half to form two Ds. Starting at the top midpoint of the square cake, cut an A by making two diagonal slices (thus forming a triangle). Spell the pieces out on a large platter, tray or cookie sheet covered with tinfoil. Frost with brightly colored decorator's icing or cake decorations to outline the D, A and D.

A Homemade Tie For Dad
You will need: white or colored paper, scissors, and crayons or markers. Cut a tie shape out of a piece of paper. (Download the Father's Day tie pattern below.) Decorate one side with a crazy tie design. On the other side, write a note to your Dad. Punch two holes at the top of the tie (reinforce with clear tape so they won't rip out) and add yarn or ribbon for tying around Dad's neck. 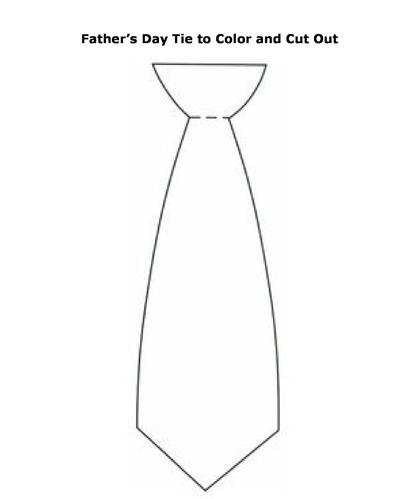