Prepare to Celebrate Pi Day on March 14th
Pi is pronounced like “pie” but is spelled without an "e." Its symbol is the Greek letter π.

Pi is a number, approximately equal to 3.14, that represents the ratio of a circle’s circumference to its diameter. It’s an irrational number, which means that it goes on for an infinite number of decimal places. Here are the first 39 digits:

Computing pi makes a good stress test for a computer—kind of like a “digital cardiogram.” In the Star Trek episode “Wolf in the Fold,” Spock foils the evil computer by commanding it to “compute to last digit the value of pi.” Since long before computers began calculating pi, some math geeks have been obsessed with memorizing a record number of digits.

Pi is an important number in many mathematical equations. It’s the most recognized mathematical constant in the world, occurring in such diverse contexts as geometry, number theory, calculus and physics. Many formulas from mathematics, science, and engineering use pi. Astrophysicists say they only need to use 39 decimal places of pi in order to do cosmological calculations that are accurate to the size of an atom.

Centuries ago mathematicians were also philosophers. Traditionally the circle represents the infinite, immeasurable world. They considered the circle to be the perfect shape. Take anything round – a plate, a jar lid, a hula hoop, the wheel of a car, etc. – and divide the length around by the length across. As long as it’s a perfect circle, you should always get the same number, 3.14, which is pi.

The Bible alludes to pi in 1 Kings 7:23 where it describes a cylindrical vessel built for the altar of Solomon’s temple: “And he made a molten sea of cast metal, ten cubits from brim to brim: it was round all about, and its height was five cubits: and a line of thirty cubits did compass it about.” These measurements result in the following equation: 333/106 = 3.141509.

Pi Day is celebrated by math enthusiasts around the world on March 14 (i.e., 3.14). The official party time begins at 1:59 pm, to make an appropriate 3.14159 when combined with the date. Besides having fun with circles, the purpose of Pi Day is to show appreciation of math and science.

Did you know…? Pi day is also Albert Einstein's Birthday! The famous mathematician was born in Germany on March 14, 1879.

Pi Day Activities
Celebrate with fruit pies, cream pies, and pizza pie! You can also have cookies, cake, candies, doughnuts, pineapple slices, and any other foods that are round.

Go on a scavenger hunt to find objects shaped like a circle. Then use a piece of string to "prove" pi by measuring their circumference and diameter.

Write the letters of the English alphabet, in capitals, clockwise around a circle, and cross out the letters that have right-left symmetry (A, H, I, M, etc.) The letters that remain group themselves in sets of 3, 1, 4, 1, 6.

See how many digits of pi you can memorize. (Hint: divide it into 5-digit "zip codes" for easier remembering.)

Read Sir Cumference and the Dragon of Pi, by Cindy Neuschwander and illustrated by Wayne Geehan. (This picture book reads like a children's fairy tale, but can be used with older children since it involves division with fractions.)

Watch an educational video of the book: https://www.youtube.com/watch?v=h7TR7zFOEZg (Explanations are provided throughout, and additional examples are provided at the end.)

And finally, write the number 3.14 on a piece of paper as shown below, then hold it up to a mirror. Look at what it spells! 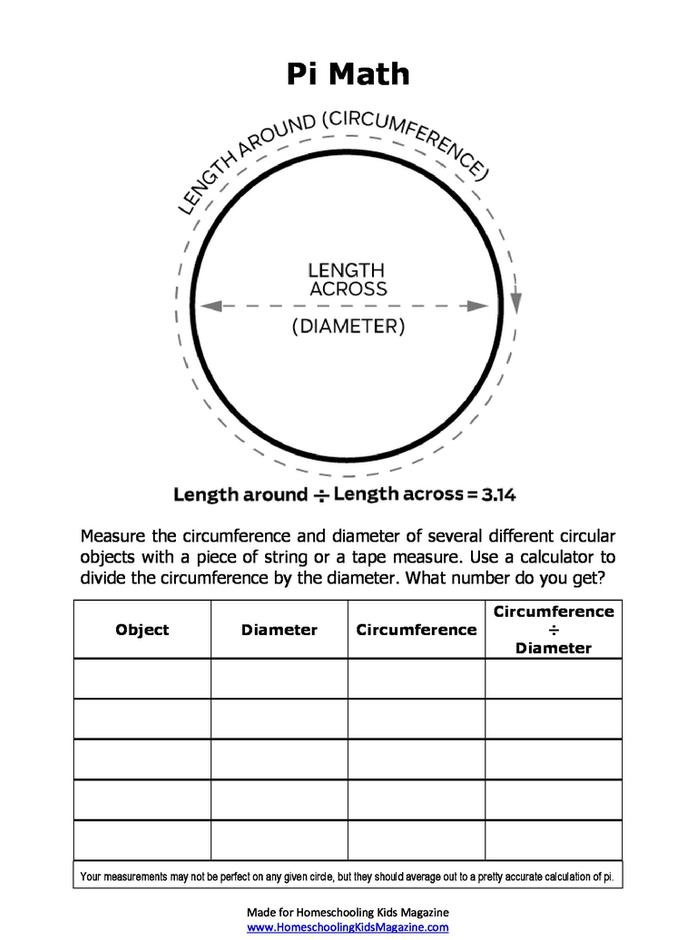 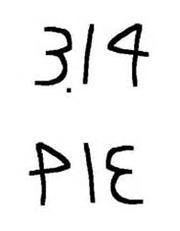