My Experience Homeschooling with Autism

I am a 48 year old married mother of 13 year old boy/girl twins.  My son, Chase, was diagnosed with autism at 20 months of age.  It was obvious to me at just a few weeks of age that my son was autistic.  He was not turning to our voices, made very little eye contact, didn't babble, was obsessed with the leaves moving in the trees, and cried non stop.  We were lucky to get such an early diagnosis some 10 years ago.  At that point, we were told he would likely never speak and end up in an institution.  He was THAT severely affected.

We immediately got him into intensive home therapy and he began to imitate, make better eye contact, and speak simple words.  After a year of ABA therapy, occupational therapy, music therapy, playgroup therapy, and speech therapy, the specialist that diagnosed him as "severely autistic" felt we should begin to think about mainstreaming him in public school.  He was just 3 1/2 years old.

We began trying mainstreamed preschool with an aide all the while continuing the intensive therapy.  He did okay, but being around many children was difficult for a child with so many sensory integration issues and delayed speech and motor skills.  He started kindergarten a year later than his twin sister.  He had a full time aide and seemed to enjoy school.  He was very social but trying to learn in a loud classroom with so many distractions was difficult.  He left kinder academically at grade level but, we knew it would be difficult to continue his therapies after being in school for 6 hours in 1st grade.  It was at that point, I began to think about homeschooling.

Each year in public mainstreamed school became more challenging.  He was deemed "too high functioning" to be in special education and loved being around his peers but, after 6 hours in school, we would often do 2-3 hours each night of homework to keep him at grade level.  Each summer we felt pressured to put him into an intensive, 4 hour per day, reading and comprehension program at a price tag of more than $15k for 6 weeks of instruction.

3rd grade was the toughest year for him in public school.  We would help him study for 3-4 tests each week including spelling, math, science and social studies. Projects started piling up. His writing skills were very behind but with just 30 minutes of school OT, it just wasn't enough.  His accelerated reading goals forced him to read 2 books per week.  He wasn't reading for enjoyment.  He was being forced to read books just to get a 90% or greater on tests.  Chase was exhausted.  We were frustrated.

I did the math.  I knew there was a great deal of wasted time in public school.  I knew they were unable to teach him in the way he learned best.  I also knew (since my daughter was a year ahead) the increased demands in 4th grade.  Lastly, he needed more time for therapies and learning to be socially adept in smaller groups.

At the end of 3rd grade, the decision to home school him was final.  Both Chase and I were excited about homeschooling.  My daughter was even excited because that meant I would have more time with her in the evening to help with public school homework and join 4-H!

Homeschooling any child (let alone one with learning and social challenges) can have both rewards and disappointments.  I have certainly found that to be true with Chase.  One thing I had hoped to achieve with homeschooling was less negative behaviors and meltdowns.  I felt homeschooling was the magic bullet!  Boy was I wrong!  However, I better learned how to manage his behaviors and emotional challenges in a more positive way!

I knew Chase was a visual learner.  I knew that reading out of a textbook wasn't going to teach Chase the way he learns.  I use many visual tools to teach Chase especially DVDs and hands on activities.  We take lots of sensory breaks and go on many field trips. He is given time to learn new skills such as computer programming and playing the keyboard and ukulele.  We also work on life skills such as personal hygiene, cleaning, and volunteering to gain work skills.  Chase is at grade level for most subjects with only 3 hours a day of academics!

Many question my decision to home school a child who is already socially challenged.  I always explain that Chase participates in social skills classes, karate classes, and joins in many community activities. We work on social skills at home with family members and during volunteer activities.

I don’t know what the future holds, but I do know, I have no plans to stop home schooling Chase.  My goal for Chase is to one day go to college, have a job, and life an independent life.  I honestly believe homeschooling will help Chase achieve those goals.

The Chocolate Spectrum
Every parent that has a child with special needs can tell you that one of the most scary things is contemplating what will happen when your child graduates from high school. And though. I gave myself several years to prepare, I was no different. My worst nightmare was having an adult child, who would have nothing to do all day but sit on the couch and watch television. So several years before that fateful day arrived, I investigated every option in my area that I could think of and then some. I even thought about starting my own adult day training program, but was overwhelmed with that thought. I had meetings with every agency in town, but the result was that there was no program in my area that would work for my son, Blake. You see, Blake has autism. He is, what you would say, on the lower end of the spectrum, meaning that he is not able to become employed in a regular job setting.

So here I was with my worst nightmare realized: Blake had no structured activity to do all day. Right around this time, I was expanding my pastry arts skills and had just completed an intensive four month long course in chocolate making. Blake was already an avid participant in the kitchen with me and enjoyed baking cookies, cupcakes and various other items. Interestingly, as I practiced my new found chocolate skills, Blake showed ability in this as well. The chocolate course I had taken had prepared me for the prospect of entering into a business. During the time I was taking the class, I didn't really consider anything that involved Blake, however, here I was with a very interested young man, who had nothing but time on his hands. And on that day the concept of The Chocolate Spectrum was born!

Blake and I embarked on a journey to make chocolate and also to raise money for autism. I decided that the best thing was to donate two dollars from each box sold to an autism charity. In addition, our dream is to grow our business so that we may provide other individuals with special needs an opportunity to be useful and productive. We sell our products both on the Internet and are expanding to conventions and craft fairs. We use only the best ingredients such as imported chocolate from Belgium. Aside from the regular selections, we also offer a gluten and casein free option for those are sensitive to these products. We have special selections for all of the holidays as well as other options if you're just in the mood for a nice box of chocolate or you want to send a gift to someone for special occasion. 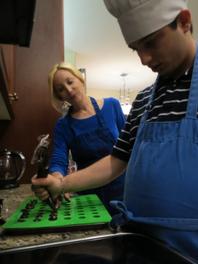