Moshe Kai Cavalin "I Am Not a Genius"

​"Genius is just a word, it's like an IQ, it's a number that's created by people that only classify with one point, and they ignore everything else that makes the individual. I don't like being called a genius and I don't want to be a number," says Moshe Kai Cavalin. "What I do is try to get wisdom through knowledge and I think practicing wisdom is much better than being a genius."

17-year-old Moshe Kai Cavalin was born in Los Angeles, California, on Valentine's Day in the year of the Tiger (1998). An only child, his mother Shu Chen Chien and father Yosef Cavalin remember that he was always a fast learner. When he was 4 months old, Moshe Kai pointed to a jet in the sky and said his first word, the Chinese word for airplane. (Moshe Kai's mother is from Taiwan and his father is from Brazil.)

From a young age, Moshe Kai's parents encouraged him to develop the two sides of his brain, incorporating lessons in both science and art. Moshe Kai began learning how to read and do math when he was 2 years old. His mom and dad also had him learn martial arts and music. Moshe Kai's parents were intent on helping him grow not just academically but physically and psychologically - "the whole thing," his mother said.

When Moshe Kai turned 6, his parents tried to enroll him in a private elementary school. "They didn't want to accept me because I knew more than the teacher there and they said I looked too bored," he recalled. After several more rejections from public schools that were afraid he would be a distraction to the other students, Moshe Kai's parents continued homeschooling their son.

Moshe Kai credits his success to his years of focused instruction balanced by the freedom to pick his after-school activities. Moshe Kai says that he doesn't waste his time playing video games because "it's not helping humanity in any way." Instead, he concentrates on real-life activities. He has mastered several Chinese martial arts, is a certified scuba diver, and has a pilot's license. Moshe Kai's other hobbies include playing the piano, chess, soccer, swimming, target shooting, and astronomy.

Although he's a big fan of movies starring Jet Li, Bruce Lee, Toni Jaa, and Jackie Chan, Moshe Kai says he limits his television time to four hours a week. He also likes Pixar movies (Wall-E is his particular favorite). Like a regular teen, he enjoys listening to music although perhaps in a wider range including Classical, Classic Rock, Weird Al Yankovic, Of Monsters and Men, Daft Punk, and Frank Sinatra. Of course, being a math whiz, his idol is Albert Einstein.

Moshe Kai had already hit the limits of his homeschooling after studying trigonometry at age 7. Then his mom started driving him to the community college. At age 8, he became the youngest student ever to take college classes in the United States. "I think most people just think he's a genius, they believe it just comes naturally," said Daniel Judge, a mathematics professor who taught Moshe Kai for two years at East Los Angeles College. "He actually worked harder than, I think, any other student I've ever had."

At 12 years of age, Moshe Kai completed his A.S. degree in Mathematics with a perfect 4.0 GPA. "He sees things very simply," said Judge. "Most students think that things should be harder than they are and they put these mental blocks in front of them... In the case of Moshe, he sees right through the complications... It's not really mystical in any way, but at the same time it's amazing." Moshe Kai inspired his college classmates, too, since they would think "Wow, if he can do it, I can do it."

"I tend to not compare myself that often to other people," said Moshe Kai. "I just try to do the best I can." Moshe Kai decided write a book, We Can Do , explaining his methods for learning in an effort to help motivate other young people. The book also talks about his parents' contribution to his education, including homeschooling him. Moshe Kai believes other students can achieve his success if they study hard and stay focused on their work.

"My case isn't that special. It's just a combination of parenting and motivation and inspiration," he explained. "People need to know you don't really need to be a genius. You just have to work hard and you can accomplish anything." The key message of his book is to stay focused, approach everything with total commitment, and not take on any endeavor half-heartedly.

Following the publication of We Can Do , Moshe Kai received more than 6,000 e-mails from his readers. Much to his surprise, the majority were about bullying and asking for help against bullies. So he wrote another book, Bully Down , to help them realize that they can have a bright and happy future after the storm passes; and above all, to alert parents that they need to be a major part of the process to help their children.

After graduating from community college, Moshe Kai attended UCLA as a Regents Scholar and was awarded a full scholarship. He majored in math with a focus on algebra, number theory, and differential equations. At age 15, Moshe Kai received his B.S. degree in Mathematics with a 3.55 GPA. In addition to solving math and physics problems, his fascination with cryptography led him toward computer science. Moshe Kai is skilled in C++ and Java programming, and he is a Certified Ethical Hacker.

UCLA law professor Eugene Volokh, who entered UCLA as a 12-year-old freshman and graduated at 15 with a bachelor's in math/computer science and later earned his law degree at UCLA, said young students face unique social adjustments in college, but they also have the advantage of having more time after graduation to try out various career paths. "Graduating early puts you in position where you can have a lot of acts in the play of your adult life," Volokh said. "It's an extra opportunity to change paths, if you want to."

Moshe Kai was surprised when NASA called to offer him a job in August 2015 after rejecting him for internships in the past because of his age. But Ricardo Arteaga, his boss and mentor at NASA, says Cavalin was perfect for a project that combines math, computers, and aircraft technology. "I needed an intern who knew software and knew mathematical algorithms," said Arteaga. "And I also needed a pilot who could fly it on a Cessna."

Since then, Moshe Kai has been working for NASA's Armstrong Flight Research Center at Edwards Air Force Base, California, helping NASA develop surveillance technology for airplanes and drones. His daily work at NASA has included running simulations of airplanes and drones that are headed for collision, and then finding ways to route them to safety. Living away from home, he relies on his landlord for rides to the grocery store or he takes a taxi. His older colleagues drive him to work every day.

Moshe Kai expects to get his online master's degree in Cyber Security Management through Brandeis University in the summer of 2016. After that, Cavalin wants to get a master's in business at the Massachusetts Institute of Technology. Then he would like to start his own cybersecurity company. He also hopes to eventually earn a doctorate degree, and use his knowledge to change the world. For now, though, he's counting down the days until his 18th birthday - when he'll be able to get a full driver's license under California law.
http://www.moshekai.com 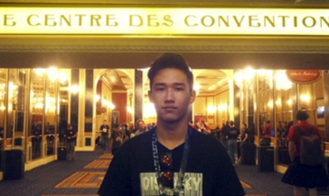