By Teri O. ​
Emily Bear (born August 30, 2001) is an American pianist, composer, and singer who became well-known at an early age. She grew up in Rockford, Illinois, with her parents Brian (an orthopedic surgeon) and Andrea (a music educator), as well as an older sister and brother (harpist and saxophonist, respectively). Emily never thought of herself as a child prodigy, but Emily’s unique musical talents were always apparent.

Andrea said that when Emily was a baby she would sing back lullabies in perfect pitch; at 18 months she played notes and scales on the piano; and as a 3-year-old she composed substantial pieces. Emily made her professional piano debut at the Ravinia Festival at the age of 5, the youngest performer ever to play there. She gained wider notice from a series of appearances on The Ellen DeGeneres Show starting at age 6.

Emily enrolled in high school for two years, graduating at age 15 in 2017. Before that, she was homeschooled which allowed her the freedom to practice piano, write and arrange compositions, practice jazz improvisation, and even study film scoring. (Emily once stated that she hoped to someday be a film composer like John Williams.)

Homeschooling also enabled Emily to perform at far-flung concerts around the world. “I love to travel and learn about other cultures,” she said. “I think it’s cool that music is so universal and can bring people together from all different backgrounds.” Last year, she headlined a 25-city sold-out European Stadium Tour, wowing audiences and garnering rave reviews. She has performed in China, Japan, Korea, Switzerland, Italy, Germany, Spain, Austria, Netherlands, Israel, Belgium, Canada, and more.

Emily’s mom said that one of the highlights of her daughter’s musical life was playing with the Performance Santa Fe Orchestra at age 10. That concert saw the world premiere of Emily’s piece “Santa Fe,” which she composed and orchestrated. “It takes a lot of courage and faith in the conductor and for Emily to work together to bring new works to life,” Andrea said. Especially when the composer is just a child! Emily Bear has since played more of her own compositions and other works with orchestras and ensembles in North America, Europe and Asia, including appearances at Carnegie Hall, the Hollywood Bowl, and the Montreux Jazz Festival.

In 2014, 13-year-old Emily was once again the guest pianist with the Performance Santa Fe Orchestra at Santa Fe’s Lensic Performing Arts Center. She and the orchestra performed George Gershwin’s “Rhapsody in Blue.” Her mother said that Emily called it “her dream piece” because it combines jazz and classical music, her two favorite genres. In fact she is recognized in both worlds, which is extremely rare. Emily leads her own jazz trio, with which she recorded Diversity and Into the Blue.

It takes a lot of talent to draw the attention of legendary jazz musician/ record producer Quincy Jones, and Emily was thrilled when he offered to mentor her. Jones is quoted as saying he is “at once astounded and inspired by the enormous talent Emily embodies. With the ability to seamlessly move from classical to jazz and be-bop, she shows as much musical prowess as pianists/composers twice her age… She is the complete 360-degree package, and there are no limits to the musical heights she can reach.”

Emily Bear is committed to using her talent to help others, so she’s developed a mission statement for her work. She only does projects that inspire, that she can learn and grow from, and that allow her to give back. She has already helped raise millions for charities across the globe through her performances. In addition, a portion of the proceeds from CD sales are donated to charity foundations such as Ronald McDonald House, Cancer Charities, PAWS Pet Rescue, and children’s hospitals in Los Angeles and Chicago.

Emily has won two ASCAP Morton Gould Young Composer Awards, and she was the youngest person ever to win the award when she was only 6 years old. Emily has won two Herb Alpert Young Jazz Composers Awards. She received the 2018 Abe Olman Scholarship at the Songwriters Hall of Fame Awards in New York City. Emily was a 2018 recipient of Illinois’ Order of Lincoln Award, the state’s highest honor for professional achievement and public service. She was also the youngest recipient of that award. At the award ceremony, she led the Rockford Symphony in her composition, “And Forever Free,” celebrating the spirit of Abraham Lincoln.

This has been Emily’s busiest year yet. In February 2019, Emily played with the World Doctors Orchestra in Israel to benefit Save a Child’s Heart and she sang together with Ester Rada. Emily composed and sang “More than Just a Girl” and “Daylight,” the opening and end title songs to Warner Brothers’ Nancy Drew and the Hidden Staircase. In addition, she plays the piano on renowned composer Mark Isham’s score for Universal’s 2019 film, A Dog’s Journey. On May 18, 2019, she played her new score to the 1938 Disney short film Merbabies at the Hollywood Bowl, as part of the 30th Anniversary celebration of Disney’s The Little Mermaid.

All of this set the stage for Emily’s debut as an original songwriter and vocalist with her 2019 single “I’m Not Alone,” produced by Toby Gad (John Legend, Beyonce, Fergie) and her upcoming pop song EP, Emotions. The first single from the album featured in the TV show Love & Hip Hop: Atlanta. Emily performed a second single, “Dancin’” on The Ellen DeGeneres Show in June 2019.

Now based in Los Angeles, it’s clear that 17-year-old Emily Bear is able to transition easily between a wide range of musical styles including jazz, classical, film music and pop – exhibiting an exceptional ability to adapt and master them, even mixing genres. We can’t wait to hear what she does next!​ 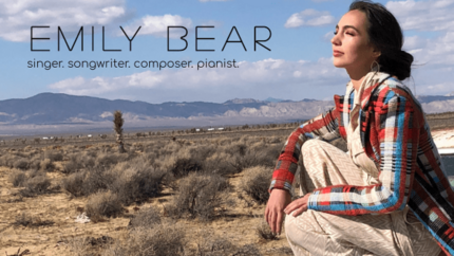